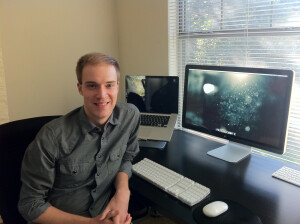 It's always a joy to introduce you to some of the new team members here at MonkDev. This week we'll introduce you to Justin Stayton, a name that may be familiar to some of you. Justin re-joins the team and answers some questions about the ATX, Freaks and Geeks, and an ideal Saturday night. Join me in welcoming (back) Justin!

You live in Austin. A popular hashtag on Twitter is #KeepAustinWeird. What makes this gem of Texas so undeniably, refreshingly weird? (And how do you plan on keeping it that way?)

Let me preface my response by saying that I've only lived in Austin since 2009, so lifetime Austinites would complain that I'm one of the reasons Austin is becoming less weird. Because it's the people that make it weird, and the large influx of outsiders has greatly watered-down the original free-spirited citizens of the city. Leslie was the ultimate personification of "Keep Austin Weird". My wife and I saw him riding his bike downtown with his signature red thong on our first weekend in town.

It's people like him that foster a culture with Eeyore's Birthday Party, Austin City Limits Music Festival, and the many hip, independent coffee shops, bookstores, and breweries throughout the city. I haven't eaten at a Chili's since moving here. That really doesn't make me weird, but I'll proudly stand with the lifers trying to Keep Austin Weird. (Go back to California!)

People at Monk know it's not about them. Ultimately, God receives the glory for our work, not any one of us. And that perspective trickles down into everything we do, from the software we build to the individual support tickets we handle. Knowing I can trust the people I work with — where their hearts are in every decision — makes Monk different than any other company I've worked for.

I see you're a fan of Divvy, one of the best apps in all of God's digital earth. What do people who aren't using the app need to know? Why do you love it so much?

Divvy is a great app for managing windows when working with lots of desktop space. I work from home with a 27" external monitor hooked into a 15" MacBook Pro, which I keep open. As someone who likes things organized, scattering windows across this much desktop space feels just as bad as papers all over my physical desk. Divvy allows me to quickly organize windows into different space on my desktop with only a keystroke or mouse click. With so much complexity in my actual work, I love apps like Divvy that keep potential distractions to a minimum.

You have a Saturday with nothing scheduled. No agenda, no commitments, nothing. How do you spend the evening?

My wife Sandra loves to cook — and we both love to eat — so if she's not trying out a new recipe, we'd probably be at one of our favorite restaurants: Home Slice Pizza, Hopdoddy Burger Bar, or La Condesa if we're feeling fancy. There would hopefully be a bottle of wine involved as well, or perhaps a pint of our favorite local beer, Thirsty Goat. If it's not too hot, maybe a walk around downtown, or a stop at our favorite italian water ice place, Rita's. Then back home to read or watch an episode of a TV show that's captured our attention (currently The Newsroom). That sounds pretty good.

As a web developer, you most likely value efficiency and simplicity. In the most efficient way possible, describe the Internet as if you were talking to a character from "Freaks & Geeks" (i.e. a high school student circa 19).**

Oh man, I love Freaks & Geeks. Especially Bill Haverchuck. As a geek, I'm pretty confident he'd have no trouble understanding that the internet is a global collection of computers that are all connected together. Not all computers are directly connected to each other; instead, smaller collections of computers, called "networks", are connected to one another. If you want to connect to a computer in England, for example, your request would travel through a number of different networks before reaching its final destination. Similar to how a train reaches different junctions on the track and is sent in the correct direction. Only much, much faster.