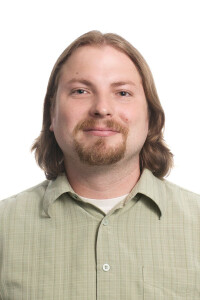 Every now and again we get to add a new team member to the family here at Monk Development. Today is no exception! You're about to meet Jesse Craycraft, a lean, mean, submarine-riding machine.

Check out Jesse's experience with junior high students and Pixie Sticks, Android phones, and the Navy!

I see that you spent some time in the Navy, specifically on submarines. Can someone with claustrophobia serve on a sub?

No – The Navy attempts to test all individuals who volunteer for sub duty, some slip through however. It makes for an interesting day when someone loses their mind under the sea in an enclosed tube.

The single most influential book you've read so far in seminary is ____. Why?

Well, the obvious answer should of course be the Bible, but I will assume you meant the second most influential book for the sake of originality. The most influential class at this point has been Conflict Resolution. In that class there were four books that were all great, but the one that stands out the most is Making Peace by Jim Van Yperen.

As a youth pastor, you've encountered your fair share of hyperactive children. What gets students more amped up: Mountain Dew or Pixie Sticks?

I don’t have any students addicted to Pixie Sticks, however there are some who drink way too much Mountain Dew. The reality is, any Jr. Higher whether chemically enhanced or not is already ramped up. High school students are too cool for Mountain Dew or Pixie Sticks.

You and your wife, Jenn, are the first husband-wife team we've had at Monk Development. What's the key to working alongside your spouse?

I’m not actually sure we are the first husband-wife team, but the key is dual zone climate control for the commute and a separate coffee cup in the office. Everything else will work itself out.

You have a Saturday night all to yourself, what's on the docket and why?

Probably something nerdy, like fixing some old electronic device that I had laying around, rewire my home theater, install some crazy Android rom on my phone, build a website, or work on some random household task that I had been putting off for months (or years).

Jesse comes to Monk with a heart for the Gospel and a desire to serve Christ and His Church.  He currently serves as Youth Pastor of Hill Country Community Church.  Prior to joining Monk, he served in the US Navy Submarine force for over 9 years where he assisted in the development of advanced submarine fire control systems and provided training for multiple submarine crews and support staff.  He has also worked as a systems engineer developing complex computing systems and implementing efficient and effective information technology solutions.  While still in high school, he assisted in the development of the internet’s premier radio controlled hobby forums.  He holds a B.S. in computer science and is working toward a Masters of Divinity.