Everything You Need to Know About Building a Church Website

I was at a conference not too long ago where the instructor talked about "Saddleback Sam." Sam is one of the most influential people at Saddleback Church. He's involved in many of the major decisions and is constantly on the minds of the leaders at Saddleback.

Only Sam doesn't exist. At least, not physically. He's a persona the good folks at the church developed to typify their average attender. When decisions need to be made, the question arises, "how would this affect Sam?" Here he is for your point of reference: 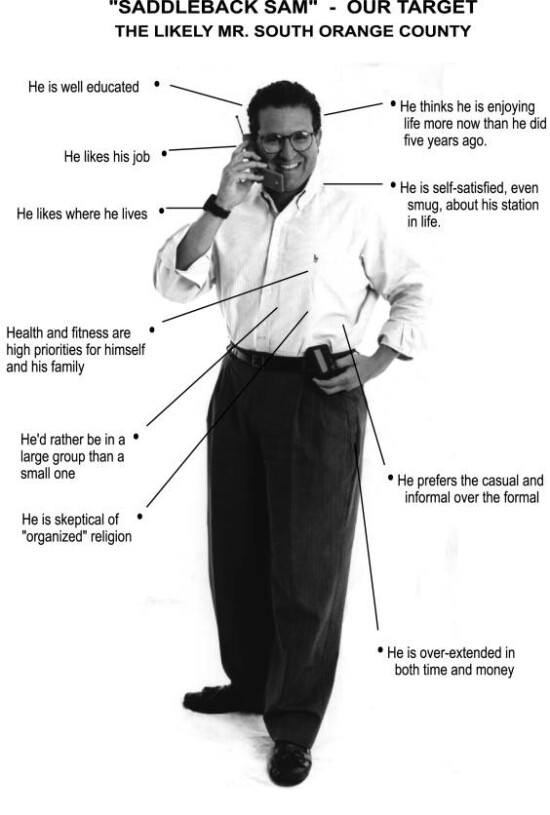 The leadership team at Saddleback wants to ensure their decisions aren't being made in a vacuum. This is why Sam is profoundly helpful. It puts flesh-and-blood to a very large community. Putting a face on a crowd is a smart way to keep your community front-and-center.

I'm sure Sam has his limitations. A single characterization can't accurately describe an entire congregation. But the point isn't to describe everyone. It's to typify what a person attending Saddleback thinks, cares, and dreams about. (There's also a Saddleback Samantha, but I couldn't find her in similar diagram form. I'm sure she's pleasant, though!)

Profiling the Concerns of Church Staffers

We're starting a new series on the blog called "Everything You Need to Know About Building a Church Website." No matter who you have on your team, or where you fall in the chain of command, we want to give you a guide for working on a website with any and all personality types.

Much like "Saddleback Sam," we'll profile the following types in the weeks ahead:

The goal is to show you what each person is concerned about and how to facilitate discussions with each one. If you're on a church staff and need to get a website updated, refreshed, or built, you won't want to miss this series.

We'll start with Techie Tom next week. But just so you're not chomping at the bit, here's a little preview of what we'll be unpacking:

Tom is a doer. He fixes anything and everything that has to do with the computers. He changes settings on servers, sets up email accounts, and troubleshoots when the office printer doesn’t work. He’ll most likely be asked to take any tech product the church invests in out for a “spin” to see what it can do. Tom cares deeply about the church website, focusing on the granular mechanical details rather than how it looks.

Know anyone like that? Are you a Techie Tom? If so, what's the best way to work with your personality type when tackling the building of a website?

Conclusion: Do you have a "Saddleback Sam" for your church? Should all churches build personas like this?