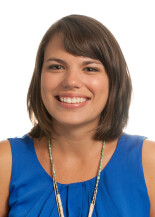 Before coming to Monk, Elysia Gleeson, recently graduated from San Diego State University with a BA in Communication. Working at Sun Diego Boardshops for five years equipped her with valuable customer service and management skills. Elysia was born and raised in San Diego, and now lives in Carlsbad with her husband. As a true San Diego native she loves the beach. Elysia is a tennis novice and card/board game enthusiast, who enjoys spending time with friends and family, bike riding and walking around beautiful places, and is always up for a random impromptu adventure.

Elysia joins Monk Development as our CEO’s Administrative Assistant and Marketing Project Coordinator. She comes with a diverse history and a healthy dose of sass for our San Diego office. I’ve had the opportunity to get to know her these past few weeks and it looks like she was just what we needed. Here’s a glimpse into the personality that we’re all growing to love.

I'd imagine Sun Diego Boardshops gets some pretty eclectic people coming in. Did you have any fun regulars?

That was actually one of my favorite parts of working there; I had the opportunity to interact with so many different kinds of people. There were your skate kids, moms, dads, business people, out of towners, and even a few Charger players came in to buy Nixon watches.

My favorite was when I would get a good rapport going with someone. It wouldn’t be work any more, it would turn into shopping with a friend, helping them pick stuff out.

Often when I was helping people they would give me something in return, sometimes a compliment, words of wisdom, or random bits of knowledge. I remember one time when I was working and started coming down with a cold. This little old woman I was helping gave me a little packet with Chinese characters on it and told me it would make me feel better. I actually took it… I have no idea what was in that little packet but it cleared my cold right up!

I loved that no day was the same as the last and I got to meet a bunch of interesting people along the way.

MonkDev has a pretty diverse group too. Based on first impressions, who would you:

Go Backpacking in Europe With?

Etienne, because I hear he is quite the world traveler and can speak many languages fluently. I’ve only known him for a couple weeks, but I can already tell that a trip with him would be anything but dull.

Hire to be your personal stylist?

Are you trying to say that I need a personal stylist? I’d probably pick you, Korrie, you come in everyday with a cute, on trend, coordinated outfit.

P.S. Can I borrow that shirt you wore today?

Be able to convince to join the circus with you?

That’s a toss up between Ricky and Kenny; actually on second thought they would make a pretty great dynamic duo act!

Trust the most with a secret?

That would probably be Jesse because he doesn’t really talk much. So I’m pretty sure my secrets would be safe with him.

Go to with all you computer problems?

Chris for sure, he is so nice and helpful... I guess it makes sense that he is a customer advocate.

I’d like to amend this question so that money would be no object.

My husband, Garrett, and I would have to start pretty early in order to fit everything into one day; there is so much to do here!

We would start off by catching the Coaster with our bikes and work our way down from Carlsbad. For breakfast we’d stop in Encinitas for some German pancakes from 101 Diner. Then we’d get back on the Coaster and take it downtown and hop on the ferry over to Coronado. There we would bike around the Bay and walk around Hotel Del.

Lunch would definitely be In-N-Out to go picnic style in Balboa Park. After we’re done walking around the park we’d head back up the coast.

We’d stop for dinner in Cardiff for some delicious Zenbu sushi. Then head home and walk down the street to the beach for a bonfire with friends. There would be story telling and of course s’mores. Apparently my perfect day revolves around food.

There may be some logistical details to work out but that would be a pretty amazing day.

Ok, so you've been here a couple of weeks now. Tell me about the atmosphere here at MonkDev HQ. Was it what you expected?

During the interview process I was told that the company culture at Monk was like one big family...and they definitely weren’t lying!

The office is in the heart of Old Town, one of my favorite San Diego spots. The smell of fresh garlic bread from the restaurant downstairs keeps my mouth watering all day. I love the feel of the place, its so comfy, cozy and welcoming. It’s not uncommon for a couple monks to retreat from their offices to work in the living room or lounge on the couches for a family style lunch. The office is fully equipped with a foosball table that gets regular use.... however, I haven’t yet been asked to play.

The co-worker camaraderie and playful banter makes me feel right at home. On one of my first days everyone was shooting rapid fire questions at me when the CEO, Drew, asked me, “if you could choose anyone in the office to eat, who would it be and why?”. That was the moment when I knew I was going to like it here. All my favorite people in the world aren’t what you would call “normal”... but what’s normal anyhow? I love that the people here aren’t afraid to let go and be themselves, even when they might be just a little bit goofy…and I mean that as a term of endearment.